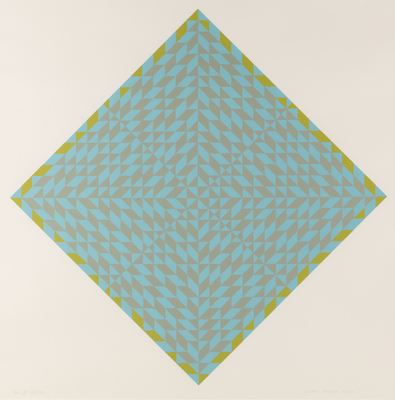 In celebration of women's history month, the Humanities Art Center is featuring the work, Do V, by the artist Anni Albers. (1899-1994) Anni Albers and her husband Josef Albers were influential designers and art educators at the Bauhaus Art School in Germany from 1922-1932. At the time, female artists were placed into the women's weaving workshop, in which she entered and in 1929 she became the acting director. She was a prolific designer experimenting with color relationships and patterns elevating the woven surface into modern abstraction. They both accepted teaching positions at The Black Mountain College in North Carolina in 1933 and remained there until 1949. From 1950-1958 they were associated with the art department of Yale University and became noted authors of design publications. Anni Albers began working in printmaking in 1963, which Do V, is an example illustrating her use of geometrical structure inspired by the natural world