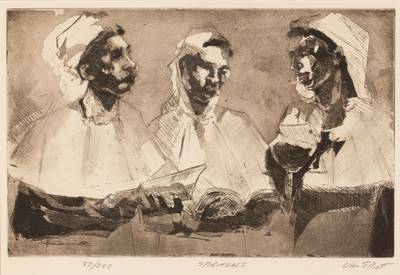 In recognition of the national holiday Juneteenth, the art work 'Spirituals' by the African American artist Van Elliott is being featured. On June 19, 1865 in Galveston, Texas, union soldiers led by Major General Gordon Granger delivered the news that all slaves were free and that the war had ended. On June 15, 2021 the Senate approved the bill making June 19th a legal holiday also known as 'Freedom Day'. Van Elliott (1924-2002) was active in Philadelphia and is known as a printmaker, educator, writer, and community activist. This work, 'Spirituals', featuring three African American women with hymnals is an etching published by the Associated American Artists in New York. This print is also within the collections of the National Gallery of Art and the Whitney Museum. The artist studied at the Samuel Fleisher School of Fine Arts in Philadelphia now known as the Samuel S. Fleisher Art Memorial. Also at the Institute San Miguel in Mexico furthering his interest in printmaking used to capture the African American experience. He taught workshops and founded educational groups using art as a creative means for cultural and scientific development.